David Troy's Twitter API project, Twittervision will be opening at the MoMA in New York City on Tuesday as part of a show called Design and the Elastic Mind.


Design and the Elastic Mind explores the relationship between science and design in the contemporary world, comprising more than 200 design objects and concepts that marry scientific research with consideration of human limitations, habits and aspirations.

There's a Media Preview on Tuesday, February 19 if you're a reporter-type person. After that, the show is open from February 24 to May 12, 2008. For more info, visit Moma.org. Congratulations to David for being recognized for creating such a compelling project.

Wow, This Is Pretty 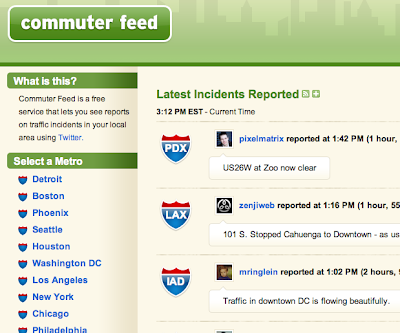 And useful too. Commuter Feed is a free service that lets you see reports on traffic incidents in your local area using Twitter. Visit the site and click the "How It Works" tab for information on how to participate.

Check out DearLazy.com, "When you have a question and are convinced that someone out there has already done the research and knows the answer you turn to asking the LazyWeb for advice." Ben has noticed that lots of folks already use Twitter as an easy way to ask the LazyWeb so he created a new service that improves upon that use case.

dearlazyweb is a personal tool which works over Twitter for querying the LazyWeb. It takes any message you send it and allows every Twitter user a chance to answer. Check out the help page for more information about how it works. To get the most out of Dear LazyWeb you need to have a Twitter account and must follow dearlazyweb.

SOMETIMES, you just have to trust your relatives. You have to be willing to let them leave the house unchallenged. Suspend disbelief and let them take the car.

That's what I tell my three daughters, anyway. But it never works out like that.

They just can't let me go.

"where r u?" one daughter texted to my phone the other day before I even turned the corner.

"cant find black cardigan ... did u take it w/o asking?" messaged the third.

Even as I pulled over to text terse replies ("going to store," "pizza" and "its *my * cardigan, im allowed to wear it"), I braced for a fresh round of inquisition:

"which store? not j crew w/o me i hope" "no pepperoni pls" " i will need sweater in an hour"

Some day these people will get their own lives, and I'll be able to pop out to buy ballet flats whenever I want. But until they do, I figured there had to be a more efficient way for me to keep in touch with all of them at once.

This was how I ended up signing up for a free account from Twitter, a group-messaging application that despite all the media attention it has received still hasn't broken into the mainstream or become a to-die-for tool for the youngest early adopters. While some tech-savvy adherents use Twitter to "micro-blog" from cellphones and BlackBerrys, as well as from computers, other digital natives like my teenage daughters and their friends have remained oblivious to its charms.

But I thought Twitter would be perfect for my purposes. The service allows users to text a message of up to 140 characters to an unlimited number of people simultaneously, from anywhere. Anytime.

In theory, the five members of my immediate family could use our cellphones to broadcast our locations, kind of like a G.P.S. with words.

To get things rolling, I sent my daughters and husband standard Twitter e-mail invitations ("slatalla wants to keep up with you on twitter") that contained a link to the service's home page. Then, while I sat in my car in front of my youngest daughter's school, I sent an update on my whereabouts: "car pool dilemma will French horn and trombone both fit in a mini" Then?

"hello" I typed. Three minutes passed. Four. Still nothing. For the first time in the nearly 19 years since I first gave birth, no one wanted to keep tabs on me.

Then suddenly my cellphone buzzed. It was my first Twitter — a text message from Zoe, my 18-year-old daughter, how exciting — and so I eagerly opened it onscreen.

This wasn't the response a well-respected early adopter such as myself typically gets, but in this case it wasn't a shock. Twitter's popularity is growing steadily (nearly 1.2 million users visited Twitter.com in December, a 223 percent increase over the same month in the previous year, according to comScore Inc., which measures Internet traffic). But it still has a much smaller following than top social networking sites like MySpace and Facebook.

In fact, among a group of about 6,000 social networking sites whose traffic is measured by Hitwise, an analysis company, Twitter .com was the 765th most popular site in January.

"The site gets a lot of buzz and attention, but its popularity is still pretty nascent as far as being mainstream," said Matt Tatham, a Hitwise spokesman. "Its traffic was around the same level as sites like Gun.net, which is a venue for online discussions concerning guns, and Whatsyourdeal.com, which is an online forum on shopping coupons."

In Twitter's case, site visitors reflect only a small percentage of users; many Twitter regulars opt to access the service exclusively from their mobile devices after an initial visit to Twitter.com.

Biz Stone, a founder, declined to say how many users the service has, but did say that third-party developers had created a number of tangential applications that drive "20 times more traffic than our Web site." (For instance, one popular application is Twittervision, an online map that shows what twitterers worldwide say in real time.)

Maybe I could convert Zoe if I explained all this to her. I called her at work.

"I'm looking at the site right now, and I don't get the point," she said. "Am I going to start getting messages like the ones posted here from people I don't know saying, 'it's snowing here, is it snowing there?' "

"No, just from the family," I replied. "You can specify who you want to get messages from."

"Well, I don't want to get messages at work, even from you, asking if it is snowing, because you know it isn't snowing," she said.

"You're missing the point," I said. "We can keep track of each other."

The rest of the afternoon? Silence. Nobody twittered me to ask anything.


"ORLANDO, FL:...Speaking of Rudy: Scuttle is that on the bus there is open talk coming loss. 12:27 PM January 28, 2008 from web." So reads a "tweet" from Ana Marie Cox, typed on her mobile phone and automatically published by a web service called "Twitter". Ms Cox, formerly the internet blogger Wonkette, covered the 2004 presidential campaign from home, on her blog. This year, travelling for Time.com, she is developing a new medium: the two-sentence observation.

Twitter imposes a 140-character-limit on all tweets. The choice is technical, not aesthetic; most mobile-service providers won't carry text messages longer than 160 characters. This limit, as with any restricted poetic form, is a strength. Foreign correspondents in the first half of the 20th century learned to write in cablese, a series of abbreviations demanded by news organisations that had to pay by the word. Twitter, according to Ms Cox, forces the writer to think economically. "If I strip out the padding," she says, "what's my real point?" Twitter, she says, works best when puncturing a candidate's own narrative. From Michigan she tweeted "Mitt [Romney] has so many things 'in my bloodstream' (cars, Michigan, business), you could make a v powerful vaccine out of him."

Twitter, like cablese, favours observation rather than analysis. Travelling with the famously open Mr McCain, Ms Cox selects the best of a wealth of anecdotes: "John McCain tells us that, rather than 'Johnny B. Goode', he would like to take the stage to Abba's 'Take a Chance on Me'." Among campaign staff, only Joe Trippi, John Edwards's campaign manager and the architect of Howard Dean's 2004 effort, shows a facility for the medium, tweeting on January 15th, "Landed in Vegas. Could have sworn I walked past William Jefferson Clinton betting it all on Red. Very strange."

Twitter does not release readership numbers. According to Biz Stone, its co-founder, the service gets half its traffic from America, with large communities in text-obsessed Japan, Britain and the Philippines. Like all web-based communications tools, it has its share of people in San Francisco talking to each other; the service crashed under the weight of messages delivered during a speech by Steve Jobs, the CEO of Apple. But the medium is hard to dismiss as a reporters' tool, particularly in countries where cell-phone networks reach farther than the internet. At 4:53 am local time on January 18th Juliana Rotich, a blogger in Kenya, tweeted in her own cablese, "in town nbi.i can smell tear gas in the air".

Last but not least :